Broxton Called Up To The Dodgers 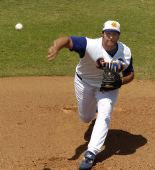 Thanks to Dodger Thoughts commenter b1ued0dger for the news that Johnathan Broxton has been called up to the big club. He apparently has recently lit up the gun at 101 on several outings. No word yet on who's going down to make room. Broxton was 4-3 with a 3.36 ERA and 99 strikeouts with the Suns. Sustained success, that's what I'm after.

Comments:
According to the article, Broxton is 21, which makes the typo in this passage awfully amusing:

Broxton, who was the Dodgers' third pick (second round) out of Burke County High School in 2003, has been primarily a starter during his 31-year minor league career, but the Dodgers moved him to the bullpen after his June 12 start.

I know the Dodgers have been calling up some career minor-leaguers of late. Must be confusing the journalists now.

Well, Rob, you can finally stop complaining that none of Logan White's much-ballyhooed draftees have made it to the majors. Broxton -- a 2nd rounder from White's first draft, the 2002 draft (contrary to what the article quoted above says about 2003) -- is the first in what will be a long-line of White draftees making it on to the Dodgers' 25-man roster over the next several years. But technically Steve Schmoll was the first Logan White player to make the Dodgers (White signed Schmoll in 2003 as a college free agent, just before the 2003 draft).