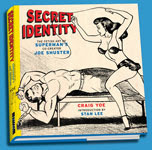 You've been a naughty Superman!

After creating Superman, Joe Shuster found himself in financial dire straits, so he created a series of related fetish art pieces which were eventually banned in the U.S. Recently rediscovered by Craig Yoe, they are collected in a book to be released on April 1 (I know, I can't believe it either) called Secret Identity. Mildly NSFW, especially considering the distance in time, but you've been warned.