First of all, I don't know who that kid is, but Garret Anderson owes him... well, something. The question arose — and I suppose those questioning the call included Tigers manager Jim Leyland — as to whether the ball was indeed a home run rather than a ground rule double. I quote from section 3.16 of the Official Rules (emphasis all mine, of course):

No interference shall be allowed when a fielder reaches over a fence, railing, rope or into a stand to catch a ball. He does so at his own risk. However, should a spectator reach out on the playing field side of such fence, railing or rope, and plainly prevent the fielder from catching the ball, then the batsman should be called out for the spectator’s interference. Example: Runner on third base, one out and a batter hits a fly ball deep to the outfield (fair or foul). Spectator clearly interferes with the outfielder attempting to catch the fly ball. Umpire calls the batter out for spectator interference. Ball is dead at the time of the call. Umpire decides that because of the distance the ball was hit, the runner on third base would have scored after the catch if the fielder had caught the ball which was interfered with, therefore, the runner is permitted to score. This might not be the case if such fly ball was interfered with a short distance from home plate.

However, since the hit was so high into the terrace level that there was no hope for the fielders to do anything other than wait for it to come down, the call for spectator interference seems to my biased eye to be somewhat suspect, and the umpires made the correct ruling. (Note that Wikipedia cites Jeffrey Maier's catch of a long flyball in Game 1 of the 1996 ALCS as a possible counterexample.)

Regardless, that wasn't the last of the Angels' scoring; given the recent travails of the Tigers' bullpen, we may assume the Angels haven't found their bats so much as the Tigers' bullpen ain't all that. (Incidental but significant applause also needs go to Orlando Cabrera, who got one into the bullpen; two homers in one game seems a huge extravagance.) But if the Halos get something from this game besides a questionable home run from Garret Anderson, it was the 3-for-4 night out of Jeff Mathis, who desperately needed it. The sudden offensive outburst brought him up to the Mendoza line, a welcome sign for those of us underwhelmed by his offense at Salt Lake.

It almost certainly bought him a measure of playing time over Ryan Budde than he already would have had. Budde got the callup from Salt Lake, surprisingly over Bobby Wilson, who was already on the 40-man. On the other hand, Wilson has barely played at AAA, whereas Budde is in his fourth season at AAA.

To the pitching end of things, Joe Saunders negotiated with the fearsome Tigers lineup (and three years ago, who would have thought I might say something like that?) with some aplomb and workman-like performances, giving up three runs over five and a third, two outs from a quality start. Given the opposition, it's a fine outing even though he finished the day with a no-decision. More, it's impressive that the Angels have taken a series from a postseason contender considering how badly they've played this month. Slumps and injuries there be, but glory, too, lies just around around the corner. 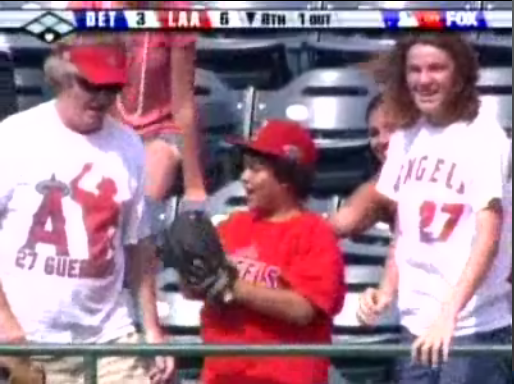 His name is Luis Castillo. Kid, the Angels' outfield is a bit crowded right now. D'ya think you could learn how to pitch in short relief?

Comments:
Am I the only one that noticed how much that kid looked like a miniature version of Bartolo? Mini-tolo

The relevant portion of the cited rule states that [w]hen there is spectator interference with any thrown or batted ball, the ball shall be dead at the moment of interference and the umpire shall impose such penalties as in his opinion will nullify the act of interference.

I suspect that the umpires would have concluded that a ball off the scoreboard would have been a double. Interestingly, they could have allowed both runners to score if, in their judgment, they would have made it home, whereas on a ground rule double, runners advance only two bases.

To be fair, all things being eqaul, that's still a ground-rule double. Given Mathis' subsequent double, et al, the Angels still would've won 10-3.

So save for a tiny SLG boost, GA doesn't inherit much from Colonino's scoop, and likely owes him little more than a wink and a nod.

It may be that the umps all saw the ball as so elevated that the kid's catch had no effect on things, i.e., it would have hit the railing and therefore would have been a HR anyway. The cameras had a different perspective... as did Leyland.

My biased eye saw the evidence of the camera as inconclusive. Bart Jr.'s glove clearly ended up below the railing, but it was unclear exactly where he intercepted the ball.

That's my story, and I'm sticking to it.

For some reason I remember this happening before. The ruling was that in right field the railing means nothing when determining a home run, the ball must clear the scoreboard only. I sit out there and the scoreboard extends out from the railing a good two feet. It also appeared that MiniTolo's glove came down right on top of the scoreboard.