Over at the tattered but regrouping remains of the Cub Reporter, Ruz notes both Kerry Wood and Mark Prior's gruesome and simultaneous entries to the DL. While Aaron Gleeman's comments about the dangers of assuming there's such a thing as a sure thing are instructive, what bothers me in reading Ruz's comments is this passage:

Meanwhile, Phil Rogers has a long, rambling piece about What It All Means over at ESPN.com, but I’m not going to honor it with a link. If you feel compelled to read it, by all means do so. If you do, look for the part where he says there’s no doubt about Wood’s ability to dominate, and then refers to him as possibly the most overrated player in the majors leagues, IN THE SAME SENTENCE.

In these difficult times, it’s nice to hae [sic] a guy like Rogers around. It feels so much better to focus my anger on him instead of trying to figure out how and why things seem to be getting off the track with these two. There are no easy answers, of course: all the discussion in the world about current and previous overuse, pitch counts, Dusty Baker, mechanics, and whatever else isn’t going to a) tell us why this is happening, or b) make it stop.

The ESPN story he refers to is here, but Ruz's spleen-venting reminds me of a quote I can't now find an attribution for but believe to be a Menckenism. Paraphrasing, the ability to hold two contradictory thoughts in one's head at the same time is a feature of an adult mind. Here, like the Firesign Theatre's Babe, Ruz falls right over trying to wrap his head around this graf:

This marks the fourth year that pitching coach Larry Rothschild has worked with Wood and Prior (the third for Baker and his bench coach, Dick Pole), and the results thus far are mixed. There's no doubting either's ability to dominate, although, in fairness to Wood's handlers, it's possible he just might be the most overrated player in the big leagues [emphasis mine].

Before moving on, let me say that I have the highest regard for Ruz, and I'm not trying to insinuate that he's somehow not an adult, but I do think his fuming over Rogers' other dumb, unsupportable remarks has clouded his judgment. Most notably, Rogers blathers about how Wood hasn't had any 15+ win seasons since joining the majors, conveniently forgetting that, during most of Wood's tenure on the club, his bullpen has lost a lot of games for him. Besides that, Rogers' piece evinces an affinity for the retrograde idea that wins are what you pay a pitcher for.

But, this paragraph, this sentence, most decidedly is defensible.

How can Wood be both overrated and dominating? Dominating certainly doesn't need much explanation; when healthy, Wood is one of the top pitchers in the National League: 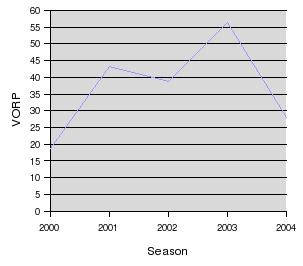 Any pitcher worth four or five wins a year comes tantalizingly close to the magical "ace" designation. But -- and here's the problem -- he's also overrated inasmuch as a pitcher on the DL isn't of any value to anyone. Will Carroll regretfully gave him a red light in his latest Cubs Team Health Report. This is ironic in light of his nickname as "Dr. Wood" (so seriously does he take his health), and as well, the 2003 entry in Wood's PECOTA card:

We’ve seen good stuff, but things look like they’re about to get better. The Cubs were careful with Wood in 2002, watching his pitch counts. He responded by giving them his first full season since 1997, making a professional career-high 33 starts. Wood had quality starts in 23 of his 33 starts (blowing one in the 7th inning), which is an outstanding rate. He’s doing a much better job of freezing lefties with his curve, so they don’t hammer him for extra-base hits like they used to. He’s good and getting better, and poised for a breakout season.

These words are -- okay, I'll use that word again -- pretty ironic considering that both Wood and Prior appeared second and third on the Pitcher Abuse Points leaderboard in 2003. In 2004, Wood again appeared near the top, and the only thing that saved Prior from a similar fate from his 2003 was his long stint on the DL.

People remember the dominance. They forget the DL-ness. Hence, overrated.

That is changing. People aren't forgetting anymore, not after 2004.

That these pitchers soared up the abuse leaderboards -- and subsequently have spent more time at the doctor's than on the mound -- at the same time as Dusty Baker's tenure in the Friendly Confines is no coincidence. He learned at the hands of a master of running his pitchers into the ground, Tommy Lasorda. If Wood and Prior fail to pitch a combined 250 innings this year, Baker will find his head in the noose for ruining two of the most promising pitchers in the majors. He won't be alone on the gibbet, though: Jim Hendry also shares some portion of the blame for failing, year after year, to fix the bullpen. In the smoke and noise surrounding the collapse of the shoulda-woulda-coulda dynasty, Cubs fans will have a lot of bitter pills to swallow, starting with this one.

Comments:
and don't forget, ace #3 zambrano is next.