A great couple of posts by Nathaniel Grow at Fangraphs about MLB's luxury tax and its erosive consequences for player salary. Salaries as a percentage of league revenue have been in dramatic decline since the inception of the luxury tax in 1996, particularly since peaking in 2003: 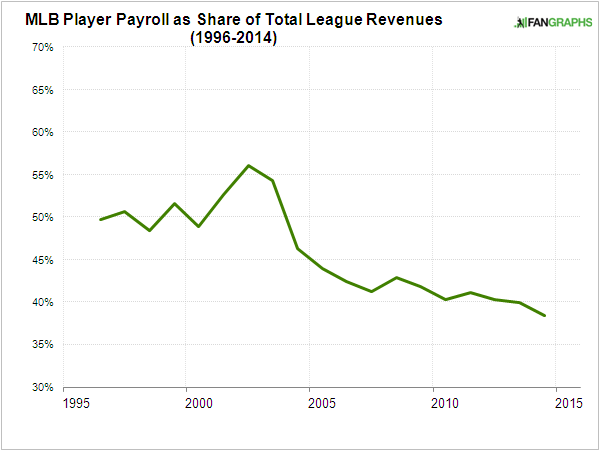 Overall, however, it appears that the luxury tax threshold has effectively become a de facto salary cap for many of MLB’s larger market teams, and thus represents an important contributing factor to the players’ declining share of MLB’s overall league revenues.

This is not insignificant. One of Bud Selig's signal achievements is two decades of labor peace, bought mostly on increasing revenue for the clubs and climbing salaries for free agents.


In hindsight, then, the MLBPA likely made a mistake by agreeing to a more restrictive luxury tax framework in the last several CBAs. And to the extent the union intends to address the players’ declining share of overall league revenues in the 2016 collective bargaining negotiations, modifying the luxury tax will likely prove to be an important piece of the puzzle.

Counteracting this, to some degree, is the willingness of teams to sign their young stars to extended deals that buy out not only remaining arbitration years, but their early free agency terms. This has the side effect of raising the cost of the few players who do actually reach free agency despite being on the wrong side of 30, precisely because there are fewer of them. But in the main, the benefits adhere to owners, who now nab the lion's share of revenues. The explosion in TV deal revenues is largely going unshared with the players, for a curious reason:


Unlike ticket sales – which generally rise as a team improves on the field – television revenue is fixed via long-term broadcasting agreements. So while franchises can increase their in-stadium profits to some degree by spending more on payroll – thereby improving the quality of their team – the same is generally not true for television revenue. As a result, teams have little incentive to spend any added broadcasting profits on payroll (because, in economic terms, the added television revenue has not adjusted the team’s marginal revenue product).

The Dodgers are in some ways an anomaly in that regard, and we shall see just how much of that actually pans out in a deal that appears largely doomed. If the MLBPA has been content to let ownership gradually but dramatically increase its revenue stream without sharing, that may not last past the next round of negotiations. On the other hand, I have to believe that negotiators for both sides remember the crippling 1994 strike, how much it soured fans on the game, and how nobody wants that again.