Hiroki Kuroda's third big-time implosion this year (the first being vs. St Louis on April 14 and the second at Citi Field May 6) was hardly the big occasion in this game. No, it was injuries to Andre Ethier and Rod Barajas that drew the most attention in a totally forgettable game. It seems like these days, a Dodger game that doesn't end in a 15-day DL stint is a success, forget the score. The good news, such as it was, was that neither Barajas nor Ethier broke anything according to x-rays, but that doesn't mean they won't be offline for a while:

Ethier suffered contusions to his left big toe, lower back and right elbow Sunday trying to flag down former teammate Juan Pierre's fourth-inning line drive in the Dodgers' 8-3 loss to the White Sox. Barajas suffered a sprained right wrist in the same inning, trying to make a diving tag at the plate as Pierre scored on Paul Konerko's sacrifice fly.

I could see either or both causing soft tissue damage, with a consequence that the Dodgers end up having to play one of their quad-A players in the outfield and/or behind the dish.

A tough opponent and a hard time winning at home looked like the Angels were due for another brutal series loss, but after crushing the Braves 9-0 on Friday, the Angels shed Saturday's loss like so much water off a duck's back. Torii Hunter's two-run homer, a scoring groundout by Alexei Amarista, and a Bobby Abreu RBI double did the trick for the win, while Tyler Chatwood posted a fine rebound game following his catastrophic start in Oakland, providing the team with seven innings of one-run ball. The bullpen deeply appreciated it, because Saturday's game used every available arm. 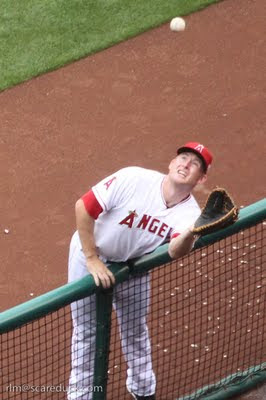