The Collapse Of Starting Pitcher Wins

It's been a while since anything really caught my attention about baseball — the Cubs won the World Series last year, an event that passed without note in these all but abandoned pages; the team will never need to buy another round anywhere in Chicago, and Theo Epstein et al. probably punched their own ticket to Cooperstown. Reversing the curse in two cursed towns is some sort of witch doctory! But with both my native teams two time zones past my now Central Daylight Time bedtime, I find keeping up with the Angels or Dodgers difficult, save on weekends or during day getaway games.

So the game moves on without me, in many ways; the deep detailed looks at various sabermetric aspects (and more, the impressive roster of solid writers) I got at Baseball Prospectus, watering holes like Baseball Think Factory (now enervated thanks to a squabble between founder Jim Furtado and Darren Viola), Jon Weisman's on-again, off-again blogs (Dodger Thoughts, now largely defunct) — all have lost my attention, and that predated my 2015 move to Arkansas. So it's kind of a surprise to see a post that really grabs me, and this one comes from ESPN: "State of the Stat: MLB numbers taking yet another crazy turn" offers some interesting changes lately in baseball. Particularly, home runs: 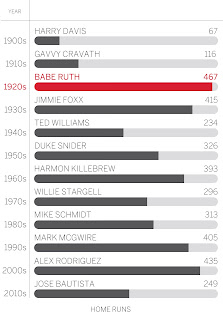 What pops out is the names of the decade home run leaders for the 1990's and 2000's, Mark McGwire and Alex Rodriguez's, respectively. Neither will make it into Cooperstown as a consequence of steroid use, and more's the pity, especially in A-Rod's case. As with Roger Clemens and Barry bonds, a legitimate first-ballot inductee is being kept out of the Hall largely because of political pressure rather than his actual record.

In some ways, though, the most interesting thing in here is the steady decline in wins by starters: 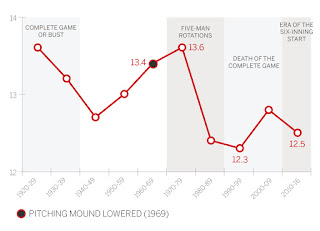 Maybe the 20-game winner is next on the endangered species list.

What would be especially ironic is if Bert Blyleven, who famously was kept out of the Hall for so long because he did not have 300 wins, might instead be an early forebear of ending the win as a pitching stat with any actual value.